So I wake up today with all this ruckus about how I am so wrong for saying that Anthony shouldn't have taken the final shot last night. That every other team gives their best player the final shot and I don't know anything about basketball for suggesting they attempt something other than one pass one shot. 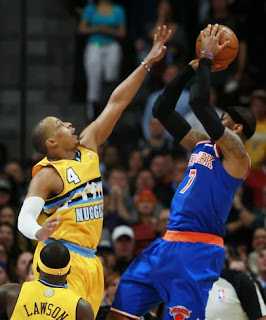 Well, let me tell you fuckers something. Your Knicks are not every other team. Your team fucking stinks. They suck. Anthony ain't Jordan you dick heads. You have no choice but to try something not so obvious when you have a chance to win a game.

In football teams that run flea flickers, end arounds and statue of liberty plays do so because they are not big enough or strong enough to over power the opponent and execute whatever they want. That's the Knicks. They must resort to trickery when they have a remote chance of winning because Anthony against everyone else has fallen short all year.

Last night Anthony against everyone got his weak shot sent back by Randy Foye. He is not clutch right now so you have no choice but to draw up some misdirection even if the ball falls into his hands for the last shot.

Your team is 3 - 12. Let me repeat that 3 - 12 and Anthony has played in every game this season. How has just handing him the ball worked out for you douche bags?

Anthony's code for the team "lacking chemistry" means that the Shumpert/Amare faction of the team hates his guts.