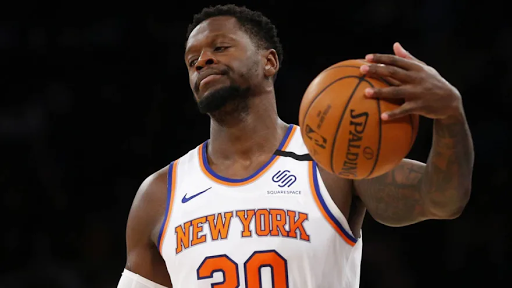 Well well well Knicks fans. Now that you have to face winning teams and do a little traveling her come all the excuses. Your team is tired, Thib's rotation is not working out, there is poor chemistry. Everything you can think of to rationalize losing. But there is only one answer, your team sucks.
Julius Randle has been figured out by the rest of the league and had another poor game. He is not the superstar answer you were hoping for. He is just a solid piece.
this year's first round draft pick is only above Frederick Weiss in the list of Knicks first round draft picks because he actually decided to show up. Other than that Obi Toppin gives you nothing on the floor. His poor play has forced coach Thibodaux to play Julius more minutes than he had hoped to and Randle has no hit the wall.
The Knicks have now lost three games in a row. I tried to give them a break and not write about this team hoping that they'd bounce back because frankly sometimes I get tired of talking about how god awful this team is.
This team has mentally checked out to the point where the league really needs to consider implementing a mercy rule. Just let the Knicks forfeit the remaining games if they don't win against the Pistons tomorrow and spare the rest of us from watching this train wreck.
I would have left this game alone had I not heard trash talk from Knicks fans again speaking about how the Nets will never win New York. Knicks fans, have you looked out the window lately? You can have New York City. It has always been Brooklyn against the world and that's the way we like it over here.
You can attempt to tie Nets history exclusively to New Jersey all you wish, we know this team began in New York. My first basketball as a child was a red, white and blue ABA ball because of the New York Nets.
Congratulations, the Knicks own New York City and fortunately for us New York City owns the Knicks. Your both broken down, relics of the past whose better days stretch back to the previous century with no hope in site. You deserve each other.
Knicks lose again, Mavericks 99 - 86 Knicks.
at 3:46 AM No comments:

The Knicks are not winners

There are no moral victories Knicks fans. Your team is very young as doesn't know how to win.

Yes they don't have another "superstar" to go along with Julius Randle, however for two nights in a row they played playoff teams minus tis star payers and although they kept both games close the Knicks are not yet winners.

Between playing the Nets and the 76ers last nights game against Philly minus Joseph Embiid should have been the one to take.

Last night was an opportunity for the Knicks first round draft pick Obadiah Toppin and Nerlens Noel to take advantage of Philly not having its star center. Unfortunately Toppin continued to look like bust he has been the entire season and got zero points. Noel was only able to add 6 points for the entire game.

Knicks management failed Toppin for not sending him to the G League after the season began. Toppin lacks confidence on the floor in my opinion because he has not mentally caught up with the NBA game.

No big man camp is going to help Toppin, he needs to be on the floor with good competition playing at near NBA speed and tempo. Hopefully the Knicks will find away to get him in a league overseas before the start of next season.

The missing piece to make the Knicks real contenders is a dominant center in my opinion.

Frank Ntilikina came up with another game scoring zero points and Alec Burks immaturity and low basketball IQ have almost guaranteed their exit from this team. 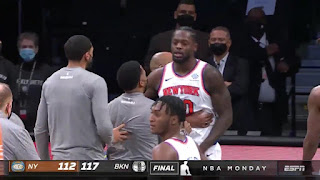 I was in a YouTube chat for Nets fans, Nets News, and these bummy, guttersnipe Knicks fans were so upset with the loss that they reported the channel and had the stream shutdown.

These are the same people who claim that the Nets are irrelevant and couldn't possibly win New York. They couldn't even handle losing a close game with out acting like babies.

Speaking of crybabies. Julius Randle, don't toss around our nice furniture like you have no class. Wait until you get back to MSG to break Dolan's cheap furniture when you get upset. You lost big boy and as long as Irving, Harden and Durant are here you will never be the dominant team in this city.

The Nets went into the the middle of the third quarter with an 18 point lead and then things began to fall apart.

Not only did both Kyrie and Harden get sloppy with the ball and commit untimely turnover but Harden's jump shot was flat and short all game.

James should be very well rested coming off the All Star break unless he was in Atlanta getting his arm tired from tossing singles in the strip clubs.

Whatever the reason, the Nets once again played down to the level of the competition. The Nets should have been up by 30 to start the fourth quarter.

When Claxton was taken off the floor by Steve Nash the Knicks saw Deandre Jordan as a big green light to attack the basket. Barret and Randle went to work on Jordan and the lead quickly evaporated.

And for some reason Nash has Joe Harris inbounding the ball after fouls. The inbounder should be the tallest, most skillful passer on the floor. I love Joe but that is not him.

These coaching mistakes are often why the Nets play down to the level of the competition and allow poor teams to make games like this close.

Fortunately for Nets fans Frank Ntilikina can't hit a shot and the Knicks guards are no match for Kyrie Irving so we came away with the win.