Is Derrick Rose as dumb as a stump ?


The NBA league pass payment request hit my account this morning and I knew that basketball season was upon us once again. 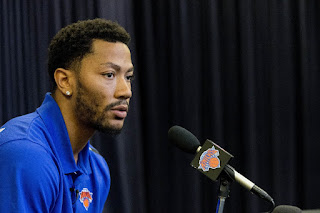 The past few days I had been reading reports out of Chicago that weren't to favorable towards Derrick Rose. I just assumed that it was old fans disgruntled because Rose hadn't brought them any championships and spent much of his career not on the floor due to injuries. But then an interesting pattern began to appear.

The writers and fans went on to say that greatest frustration with Rose was his low basketball IQ and his inability the learn the offense. So much so that the playbook had to be dumbed down in order for him to manage the games.

I still had a problem with the statements until I read the New York Daily News this morning and all the extremely disturbing pieces began falling into place.

Stefan Bondy reported on Rose's struggle to grasp the triangle offense. Are the folks in Chicago correct? Is  Derrick Rose as dumb as a stump and can't figure out the triangle?

We shall see but one thing that should alarm Knicks fans were Derrick's haunting words. "I think at the end of the game or a game winning shot or something like that I don't think it's going to be in the triangle. Either me or Melo create and take the shot".

So Rose came to this conclusion himself based upon all the winning that he and Melo have done in their careers?

You Knicks fans are going to have a long fucking season and I can't wait.

Watching Dense Derrick is going to be fun.