He deserves better than the Knicks

With eight guys in double figures scoring for the Atlanta Hawks you Knicks fans can't blame a single player for this loss. Your entire team, coached by a defensive guru, sucks on defense. 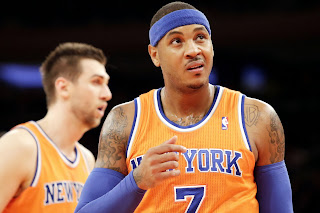 They looked lost and confused on switches, getting back on fast breaks and defending screens and pick and rolls.

If I were still a Knicks fan I'd be shouting for Woodson's fat head but since the Knicks constant losing at home (1-6 with 5 straight losses) benefits my team the Brooklyn Nets I'm simply going to enjoy this.

The couple of minutes when the Knicks were actually getting back into the game Felton, Anthony and Smith were off the floor. Prigioni was the point and moving the ball well to find Hardaway Jr., Shumpert and Stoudemire for good shots.

But we all know that Woodson can't let good fortune go on for to long before he makes one of his patented genius moves. So he put JR Smith into the game who stopped all ball movement so that he could jack up his off the mark shots and the game went back into the Hawks favor and they never looked back.

Anthony stood up for the last three minutes of the game on the sidelines just watching. If I could read minds I'd guess he was saying to himself, 'There's no way in hell I'm staying here for two more years of this shit.'.

Expect his management team to say to the rest of the league that it is not a forgone conclusion that he will return for the extra few dollars the Knicks can offer, when he opts out of his contract at the end of the season, so enter your deals fast and often.

I wasn't enamored with the Iman Shumpert draft pick but I have really come to like this kid. Shumpert played solid defense and stepped up his scoring in the second half tonight.

I hope he gets traded soon because he deserves better than the Knicks and James Dolan.