Mr. Dolan, with all due respect sir

It is being reported today that while the Timberwolves were kicking the crap out of the Knicks the owner James Dolan was having a meltdown. 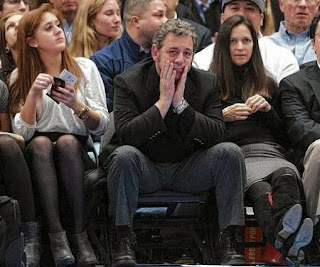 Dolan is said to have torn the new GM Steve Mills a new asshole; even though Mills had nothing to do bringing in any of the players, the coaches or the scouts. According to Dolan, the Timberwolves' 40 point 1st quarter was all Mills' fault.

Dolan was so pissed that the team that he guaranteed would win a championship this season was sucking so hard that he even demanded that the Knick City Dancers, get this, stop dancing. You gotta love this.

Three games into the season James Dolan had a moment of clarity while watching his team getting waxed, had a panic attack and lost his freaking mind.

It is now apparent to him that the past ten years of his meddling, weird relationship with Isiah Thomas, not allowing Donnie Walsh to have autonomy over trades and negotiations and pushing all his chips in on Carmelo Anthony have really screwed this team for the foreseeable future. He is now lashing out hell bent on kicking ass to cover for his mistakes.