The new GM Grunwald selected some Greek kid in this year's NBA draft who may not ever play in the NBA. If he does, at the very earliest he won't be seen in a Knicks uniform until 2014.

Great move Mr. Grunwald, I think I now see the spark of genius that inspired Jim Dolan to hire you. 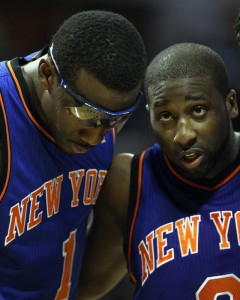 Scott Machado was available when the 48th pick came around but why would the Knicks draft a young point guard when Steve Austin's doctor is done putting Baron Davis' knee back together. He'll be good as new.

But, just in case he isn't wouldn't you like to see Raymond Felton return to the Knicks? I know I would.

I think a motivated Felton would show up in tremendous shape with a chip on his shoulder motivated to play in the last NBA home gym that he had great success.

Now I know what you're thinking: 'D'Antoni is no longer here and Raymond may not fit in Mike Woodson's slowdown and pass it to Carmelo offense'. Well, don't be concerned and I'll tell you why he'd be successful again.

Raymond is going to back up Lin which means he'll be playing his minutes with the second unit. We know that Woodson is going to talk Amare' into coming off the bench because he and Carmelo play basically the same position and cannot play at the same time.

Amare' knows that with Raymond on the floor with him again he'll be able to run the pick and roll the two of them worked so lovely before Anthony got here and they will run it whether Woodson calls it or not.

Novak will also benefit on that second unit because when Raymond's defender comes over the top of the pick Felton will dribble on a line towards the basket forcing Novak's man to come down and help leaving him wide open for his three ball. Everybody wins.

The critics will say that Felton never played well when he wasn't running the D'Antoni system but the exact same thing can be said for Jeremy Lin. Felton has never "had trouble dribbling" when he was pressured and could always go left as well as he went right. The same can't be said for Lin. I like Lin but take the D'Antoni system away Felton is a better point guard right now than Jeremy.

If we see Raymond Felton return to MSG look for a happy and inspired Amare' Stoudemire and the Knicks to win the Eastern conference.
at 11:36 PM No comments: