This is a .500 basketball team, stop your blood clot crying about it.

So Ronnie Brewer had to sacrifice his head for the sorry loss last night but it was another very hard head that was to blame.

Brewer hadn't lived up to the billing on defense and he couldn't hit an open shot. He sounds like the definition of the Knicks team as a whole leading up to the all-star break and beyond. Didn't I explain all this a month ago? Am I talking to myself over here?!? 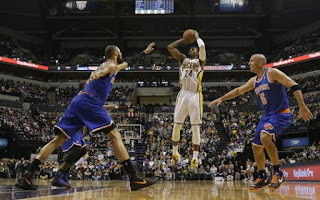 Coach Woodson's hard head has caught up with him and he still refuses to sit Shumpert down, refuses to stop forcing the Amare with Carmelo experiment and is not cracking the whip when this team shows up without fire and intensity.

Jason Kidd's feelings need to be second to the well being of the starting line up but we know that when coach Woodson gets something in his fat head its damn near impossible to get it out.

Now there is talk about him possibly shaking up the lineup. Woodson needs to Taze this lineup inorder to get these dudes out of their comfort zones.

My team in Brooklyn is surging. I hope we get the Knicks in the first round.