As a result of the storm

Mayor Bloomberg just announced that he asked the NBA to cancel tomorrow night's opening game against the Nets in Brooklyn due to complications as a result of the storm. Just means that the Knicks get to prolong their first ass kicking. 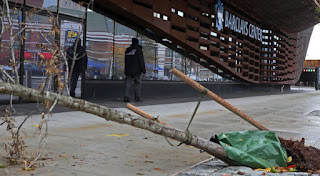 As you may know Amare' is out for 6-8 weeks which I regretfully feel might be a blessing in disguise.

When Amare gets back the Knicks will probably have a nice roll going and he'll have no choice but to accept a lesser position on the second team. I was hoping for a lot of in fighting over minutes and bad personnel changes by Woodson. Now it looks like I'm not going to get that and Felton and Carmelo are going to establish a similar relationship that Raymond and Amare once shared.

The Knicks might actually have a decent season now. Damn it!
at 3:30 PM No comments:

Shall we crown them now?!?

The Knicks have signed Rasheed Wallace. So I guess that means I should take down my Brooklyn Nets Banners and put the hats in the closet right?!?