Before the 2008 draft I was hoping briefly that Kevin Love would fall to the Knicks because I saw his great potential. 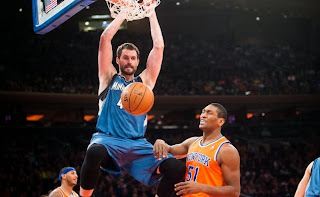 It was brief hope because I knew that the Knicks would either not be fortunate enough to select him or to dumb to take him if he were there. I was still a fan at the time.

At the very least I thought they'd get Roy Hibbert and begin building the team from the inside out.

We all know that neither scenario played out. Gallinari, who was drafted, is no longer on the team because he and half the team along with a bunch of draft picks were traded to the Denver Nuggets in 2011 for Carmelo Anthony and Chauncey Billups.

Five years later the Knicks are no better in the playoffs and Hibbert and Love have turned into front court beasts.

Kevin Love came into the Garden yesterday and showed Knicks fans what happens when you nurture potential and let it grow with the same or similar offensive and defensive philosophy for five years.

Kevin Love went Reggie Miller on the Knicks yesterday and whipped the Knicks handily. Roy Hibbert ran them out of the playoffs last season and you fools think your team has a chance to win a championship this season? Don't make me laugh.