It's time for more changes on the Knicks

As you know by now the Knicks were destroyed by the Boston Celtics last night.

Some people are using Amare's back and a lack of Chauncey Billups to argue for why the Celtics went up 3-0 last night but it would not have mattered if they both had been 100 percent last night. They still would have lost this game as badly as they did.

What the Knicks needed last night was outstanding guard play and let's finally be honest with ourselves. Toney Douglas isn't capable of taking control of a team and running it efficiently and Landry Fields does not have the offensive game to exploit opportunities or put pressure on opponents to defend. 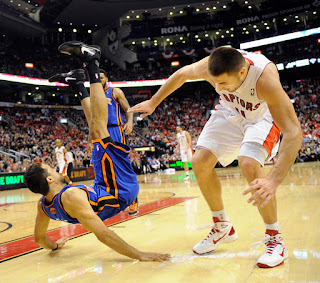 Landry's success early this season was due to the fact the no one in the league defended him and he was able to capitalize on his savvy around the basket for easy put backs, dunks and he hit the occasional jump shot for which he wasn't tightly defended. Everyone is wise to his game now and dare him to make shots that he's simply not good enough to make consistently. Corey Brewer sure would have helped last night on both ends of the floor.

However, if David Lee could learn how to shoot a mid range jumper consistently between his rookie and second season then so can Landry if he is willing to put in the work.

I applaud Donnie Walsh for the job that he has done with this team and would like to have him back but only if he can abandon the Mike D'Antoni ship and sign a serious coach.

I think Donnie will acquire a legit point guard that can lead this team to success and find another serviceable big man or two which would allow Amare to slide back to his natural power forward position where he can be even more dominant on nights when Carmelo's jump shot is still in the locker room.

But if Donnie insists on seeing D'Antoni have an entire season with this roster under some silly notion of owing him a full year with Amare and Carmelo then the team won't be successful next season when it counts most, in the playoffs.

D'Antoni is not going to become a defensive guru during the summer nor is he going to learn how to think on his feet and make necessary game time adjustments during timeouts that better coaches have done against him this season. And wasn't his opposition to the Suns bringing in a defensive coach one of the main reasons why he and the Suns GM butted heads and expedited his departure from Phoenix? Why does anyone think that's going to work here?

This playoff series is over even if the Celtics gift the Knicks a game on Sunday. It's time for more changes on the Knicks to take this team to the next level some of those changes may need to be coach, team president or both.

Carmelo Anthony did all he could do

Carmelo Anthony had one of the greatest individual playoff games in Knicks history.

After Stoudemire went out with a stiff back Anthony took the weight of the entire team on his shoulders and damn near beat the Boston Celtics single handed with scoring rebounding and assists.

In the final 16 seconds with an opportunity to win Carmelo with the ball in his hands reacted correctly to a double team and found Jared Jeffries under the basket. A layup, a dunk or a pump fake to draw some foul shoots would have put the Knicks in the lead and probably on to a victory. 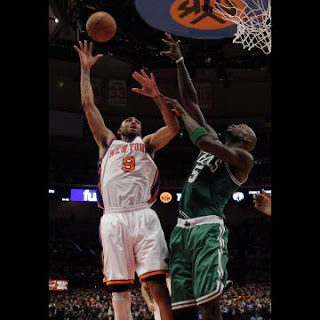 Jeffries is quoted as having said that he saw Garnett coming down to him so instead of attempting to get Garnett in the air with a pump fake or one dribble backward to increase his distance away from him he committed the cardinal sign of attempting to pass the ball in the paint in the air which Garnett blocked and stole sealing the victory.

I can only assume that because Jared Jefrries spends so little time in the paint on offense he didn't know that a bounce pass is almost impossible to defend by a moving player in anyway other than kicking the ball. Even kicking it as it's going behind the defender is almost unheard of. Such a pass to Walker, who was cutting to the basket, would have resulted in an easy dunk but Jeffries is the last person you want thinking on the offensive end.

Carmelo Anthony did all he could do and made the correct decision at the end of the game to bad it wasn't Turiaf who received that pass instead of Jeffries.

And there you have it

Ray Allen does his playoff game one magic by hitting a clutch three putting the Celtics up 87-85 with approximately eleven seconds left on the clock. Toney Douglas quickly brings the ball up the court and with seven second remaining passes the ball to Carmelo Anthony.

With plenty of time to either drive the ball to the basket for a shot or to kick it back out to the open man what does Carmelo do? What he has done since the moment he became a Knick? What he has done his entire career? He selfishly fires off a deep three which he misses of course and the Knicks go on to lose 87-85.

Get used to this Knicks fans. And as I am typing this Chandler and Gallinari are jumping on the Oklahoma Thunder.