It was reported today by Mike Isola in the New York Daily News that the New York Knicks are considering trading Iman Shumpert to Denver for Kenneth Faried. 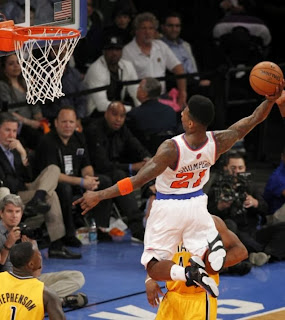 Last year Stephen A Smith went on a rampage when he discovered that James Dolan had a personal problem with Shumpert and was thinking of trading him at that time.

Knicks fans your meddling ass owner is the sole reason why your team will never win a championship and the main reason why I jumped ship as a fan never to return.

This idiot Dolan actually thinks he knows something about putting a winning basketball team together and hasn't managed to get out of the second round of the playoffs in 18 years.

It appears that if you don't kiss Dolan's ring he wants no part of you. If you dare speak up or look out for yourself his little ego simply can't handle it.

In order to stay in the good graces of this guy you must humble yourself and accept whatever money or position he gives and receive it gladly.

Shumpert is not just a young talent with the potential to be great, Shumpert stood up for himself numerous times to management it is burns Dolan's ass to have this "ingrate" around. Especially now that the savior JR Smith has returned to the lineup Shump is expendable in Dolan's mind.

Shumpert balked at playing in the summer league to showcase himself to other teams for the benefit of Dolan. When reporters asked him how walking out of the summer league would bother Dolan Iman had the courage to say that he isn't worried in the least about James Dolan. The same James Dolan who himself fell asleep during a playoff game last season.

Knicks fans you keep all your ridiculous championship fantasies because I know that they keep you warm during the cold winter nights but if you will ever get honest with yourselves you'll know that as long as James Dolan continues to meddle your team isn't going anywhere.

If the trade rumors are right the Knicks will lose again without even playing a game.