It's Time To Move On!

So not only did Toney Douglas forget how the Knicks played the other night against the Kings but he also forgot the play out of a time out with 17 seconds seconds left and was out of position which forced Carmelo to throw up a bad shot. 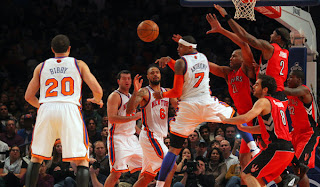 It is time for the experiment to be over and find out what trade value is in both Toney Douglas and Landry Fields. Really.