An idol mind is the devil's workshop

The Knicks have a major problem with Shumpert at the point guard position which is costing the Knicks games but it is not as simple as poor play. Shumpert is too idol struck by Carmelo Anthony. 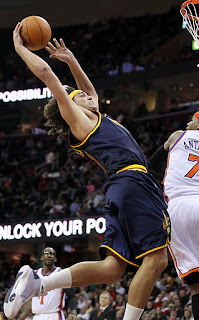 When Carmelo Anthony stops rotating the ball and throws up wild shots so does Shumpert. When Anthony passes the ball and puts his selfish offensive style in his pocket Shumpert follows suit.

Shumpert is so stuck on the idea of playing like and with his hero that any game plans and coaching just completely leave his mind when he is on the floor with Anthony.

D'Antoni either has to make him the two guard or send him to the D-League for reps at the point until running an offense becomes his second nature and not idol worship.

Mr. Dolan, if you are reading this please believe me when I say that trading Carmelo and  Douglas to the Orlando magic for Dwight Howard is a better idea than trading Amare' Stoudemire. Stop listening to Isiah for the love of God.

And Toney Douglas just plane sucks, I had to get that in.