How was it possible to give up 30 points in the paint in the first half and allow the Lakers to shoot 72% from the floor with the "best front court" in the NBA and a newly hired defensive coach? Unfuckingbelievable.

I won't even get into how the play from the point and two guard positions ain't worth a box of grits. Well, I guess I just did didn't I?!? Since I'm there Toney Douglas simply doesn't have the balls to take command of this offensive, pass the ball to the open man whomever that might be and demand that Carmelo and Amare rotate the ball and cut to the basket if they want shots. Until that happens he ain't no point guard he's an enabler. 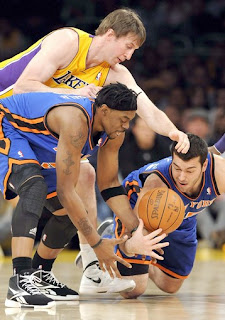 ENABLER: One who enables another to persist in self-destructive behavior by providing excuses or making it possible to avoid the consequences of such behavior.

When Amare and Melo simply go about freelancing and jacking up wild shots that is self-destructive behavior Douglas is allowing.

I wish D'Antoni had allowed Amare and Melo to stay on the bench in the second quarter and ride out the hustling defensive and excellent ball movement from the "second unit". Maybe their example would have sparked something. But hey I ain't the coach and from the looks of this team, neither is Mike D'Antoni.