There are two tried and true was of building a championship basketball team. 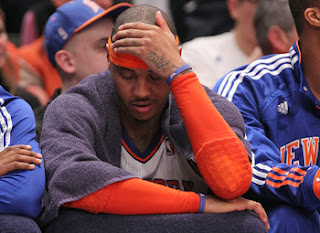 The first way is by acquiring young players via the draft or young free agents with potential and building a solid team. Then, hopefully one or more of those young acquisitions becomes a superstar which your solid team matures around.

The second way is similar to the first with the exception of using the cap space and draft picks that you wisely hold on to as you build your solid young team to acquire a free agent superstar to take your solid team over the top.

The idea that you can trade all the pieces of a young developing team away along with draft picks all the while sacrificing cap space to acquire one superstar and still put together a solid team on the cheap is and was ridiculous. It is also the exact formula that James Dolan implemented that has failed miserably.

Today I was listening to WFAN and I have to tell you at times I think that Joe and Evan have rocks in their heads. We're not even going to talk about Bill Daughtry at ESPN radio who wears his skintight Knicks City Dancer uniform to the station every night.

These are the same guys who always argue after Carmelo gets 50 and the Knicks lose that it's not Anthony's fault because he doesn't have anyone around him to pass the ball to for help. Well guys, is it possible that he doesn't have anyone to pass to and won't anytime in the near future because of the lack of trade-able players, draft picks and no cap space? Go ahead and tell me, I'll wait.

The Knicks fan will never see Carmelo Anthony compete for a championship in a Knick uniform and with even fewer gutsy players on the team this year they may not even finish .500 with your fancy schmancy freakin' superstar.

James Dolan will never admit his error and trade Anthony while he can get something for him and Anthony knows that this group of geniuses in management don't have a clue on how to bring him the help he needs. How can Anthony possibly stay here after this season?

Patience is what is needed to turn the Knicks around but it too was included in the trade to Denver.
at 12:49 PM