That's not the real story

I could go on about how the Knicks refused to defend the corner three point shot. I could question why Coach Woodson abandoned the zone defense in the second half that was affective enough to help create the lead in the first half. But why since that's not the real story. 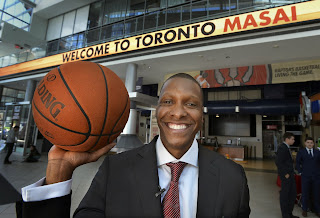 Yes the Knicks lost again, we know and they are going to continue to lose because there isn't anything elite about them.

No, the real story is about Masai Ujiri.

You know, the guy who fleeced the Knicks when he was the GM of the Denver Nuggets who orchestrated the Carmelo Anthony trade.

You see, Masai is now the GM of the Toronto Raptors who got Dolan again when he talked him out of the tough old players that kept the team stable and competitive enough to get 54 wins last season for Adrea Bargnani who himself is now the subject of Knicks trade rumors.

Like the bastard or not Masai has put together a team that is now at the top of the Atlantic division with key victories against the Oklahoma City Thunder and tonight against the Knicks. It looks like Toronto is about to pull away from the rest of the division and dash all of Woodson's foolish talk about winning the division this week.

Not going to happen Knicks fans you must now contend with Masai Ujiri not only destroying any hopes of your GM putting a real team together but now the guy is building a direct competitor to your Knicks.

What is your excuse now Knicks fans?