Can you believe that?

Last night, Kyrie Irving of the Cleveland Cavaliers had Pablo Prigioni and Raymond Felton spinning like tops with the assortments of crossovers and behind the back dribbling he did to them.

I almost felt sorry for them because I know they'll have to fly back to New York with the ankles wrapped and elevated on the plane which can't be the most comfortable position. 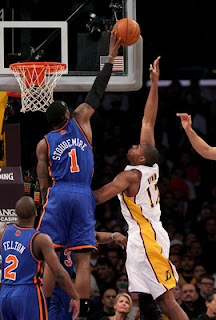 Yet again I heard Michael Kay running his big mouth defending Carmelo Anthony and exclaiming "Who should he be passing the ball too!?!".

Kay, he should be passing the ball to the four other millionaires on the floor with him so that the team can play "good" basketball.

I know you have been a Knick fan your entire life and you have rarely seen well played team ball in the Garden but sound basketball will always get more wins than not especially in today's league when so few teams do and it doesn't require a great deal of talent which is exactly the state of the Knicks.

Stephen A is right and I have said it for months myself, if you fools think that Melo is signing up for more of this crap you are as stupid as I think you are.

Amare and Bargnani were the only players blocking shots and attempting to hustle on defense last night, can you believe that?