Mike Isola reported in the New York Daily News last night an explanation for the single shot JR Smith took in the game against the Celtics the other day.

According to Isola, Woodson and Smith got into a heated exchange after the Chicago game over some very foul and insulting language JR said to Woodson during the game. Woodson had been trying to get Smith to improve his shot selection and last year's sixth man of the year took exception to Woodson's coaching and let off some very rude slick talk on the bench. 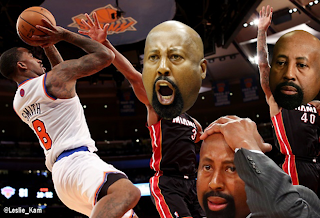 Well, as geniuses do, the next opportunity JR got to show who's the boss was the Celtics game in which he registered a single shot and got two points from two free throws. Acting like a goddamn baby he really showed up Woodson by waiting until the fourth quarter to take one shot. How you like those apples coach?!?

This is all Dolan's fault. He signed this guy unbeknownst to the coach at the time who did not want him, didn't do his due diligence to check out the knee he wrecked while playing in China, and paid no attention to his past antics in Denver.

JR destroyed any chance of advancing in the playoffs last year with his selfish cheap shot on Jason Terry and he started this season suspended for five games because he had drugs in his system.

WTF are they holding on to this idiot for?

It should be JR, Felton and Metta World Peace going through luggage checks at JFK before their flight to Toronto not Shumpert or the 2018 first round pick.

These fucking Knicks lose even when they win. LOL You are a fool to still be a fan of this team.
at 2:44 AM