Knicks fans, you have it all wrong

So I wake up this morning at 4:30 AM to get my Rack workout on to get pumped for the day and I turn the radio on to the local sports talk radio show just because I enjoy hearing Knicks fans whine. I really do.

I feel the need to say something to Knicks fans and Carmelo Anthony's college coach who is about as bias as they come. 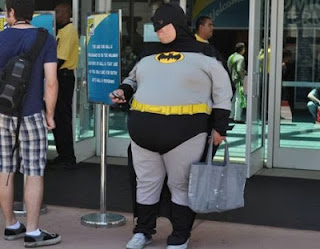 Listen guys, I hear the comparisons of Anthony to Jordan, Kobe, Lebron and Magic and the argument always comes back to the fact that those guys had a sidekick who helped them win. Their Robin helping out Batman and this is the reason why Carmelo Anthony hasn't won.

Knicks fans, you have it all wrong. Carmelo Anthony ain't Batman, he's Robin.

Carmelo Anthony has a single skill which is scoring. He doesn't have anything else in his utility belt. His belt is strictly for holding up his tights.

Carmelo Anthony doesn't have shutdown defense in his utility belt that can stop the likes of Stephenson in the fourth quarter.

Carmelo Anthony doesn't have ferocious rebounding in his utility belt that could battle West or Hibbert.

The villains of the league have never worried about a team that Anthony was on because they knew he was Robin wearing Batman's costume. When are Knicks fans going to realize that too?
at 5:47 AM