There is an old saying, "Pressure bursts pipes". Well, it destroys Knicks shooting too.

In the second game in which Woodson should have made the decision to run all offense through Raymond Felton and not Anthony or Smith poor coaching and not poor play was the Knicks demise. 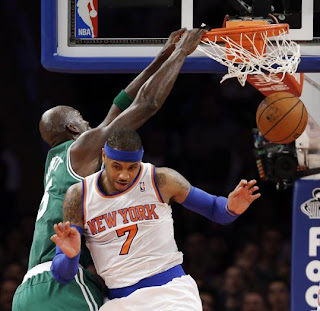 There are "famous" radio personalities who argue that Carmelo Anthony's ball hogging doesn't take shots away from anyone who can make them. Well, the past two games you fools have been dead wrong.

Anthony's history isn't a fairy tale it is actual fact. He gets tight in the playoffs and has been a failure in the post season for the majority of his career.

Woodson, who is either unable to see that his star couldn't hit an elephant in the ass with a tennis racket or was simply in denial, failed to make the high pick and roll the central offense tonight even with Melo and Smith on the floor and it cost them the game.

The Celtics have figured out how to take away the three point shot and Bass is playing defense inside of Carmelo's jersey.

JR Smith celebrated much too soon also and had a very John Starks Game 6 in the Finals like game. He was awful.

For all you Knicks fans who call radio shows with your cockamamie schemes to get rid of Amare Stoudmire I'll bet you wish you had Amare tonight didn't you?

Can someone explain to me why Copeland, who is the only big man left with real offensive skills and could but serious heat on the Celtics to defend has not played in the two Knicks losses? Coach Woodson is really making some questionable decisions right now.

Knicks fans prepare for a NY Mets like collapse because I can smell it cookin'.