Many fans will applaud the effort of the Knicks tonight.

They will talk about their team's fighting spirit and how tough it was to go into enemy territory and snatch victory from the jaws of defeat. 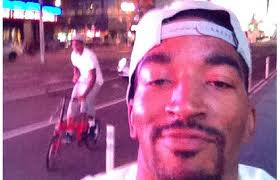 The talking heads in the media will pull out all the cliches regarding how the Knicks fans should be grateful for this playoff run after not experiencing such in 13 years and tie a bow around this season.

What no one will talk about is how JR Smith never boxed out the man he was guarding, Stephenson tonight,  a single time this series and it was the offensive rebounding from the Pacers back court that was the hidden key to their domination over the Knicks.

JR didn't give you much in the way of scoring again either. Utterly useless without a bottle in his hand.

If you are a Knicks fan you can only hope that JR Smith opts out of the final two years of his contract and tests the free market. You guys are counting on JR taking is fundamentally poor drunk act on the road to another team next season, we both know it.

I am sure that the guys in Knicks management are ready to see him go as well.

I have to say that I enjoyed watching father time jump on Jason Kidd's back every time he has attempted a jump shot since around my birthday in April.

Can we be honest about Mike Woodson's failure as a coach due to keeping Copeland on the bench for the first four games of the series, only to use him out of sheer desperation? I don't think he learned that under Larry Brown.

This year was the Knicks best chance to make it to the finals with this group.

Next season Derrick Rose is back with the Bulls and will most likely contend with a seasoned Brooklyn Nets team who will also upgrade the coaching position. Not to mention the Pacers getting better just because of their experience this year and all the cap space and draft picks they have giving them the ability to add a piece or two.

The Knicks won't be getting anywhere near the second round of the playoffs for foreseeable future. Was Carmelo Anthony really worth only this? Are you not entertained? I am for certain.

You had the head of the current Pacers brain trust, Donnie Walsh, building you exactly the type of team that eliminated you and advanced in the playoffs tonight without Carmelo Anthony but that wasn't good enough for you and James Dolan.

Hopefully we can mature as a city and stop all the "Gotta have a superstar" foolishness. You gotta play team basketball with good young role players and hope you add a star to take you over the top. You don't get rid of the young role players for the sake of having a star. Unless you aren't really about the business of winning.

Now let me turn this computer off and fall asleep to all the whining from callers on the New York City sports radio shows.

Sweet dreams Knicks fans until, well you guys have a long until coming.