Isn't this exactly what these same guys did in Denver with little success?

The only chance the Knicks have to defeat the Pacers in the second round of the playoffs is running the offense through Raymond Felton as he runs the high pick and roll. 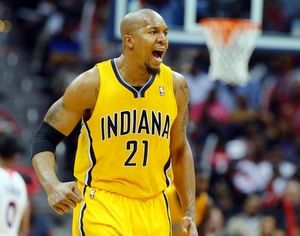 It should be Raymond's decision to set players up for the best possible shot and to draw defenders.

Today's game began that way for some inexplicable reason at the end of the first quarter and for the rest of the game Carmelo Anthony and JR Smith got it in their minds that they should be the ones bringing the ball up court and running the offense.

The Pacers were just waiting for that to happen and seized the opportunities to jump out to a big lead based on Melo's poor shooting and Smith reverting to his old knucklehead form.

Isn't this exactly what these same guys did in Denver with little success?

When they did decide to step things up through Raymond and attack the rim it was too little too late and the Knicks lost what should have been a very winnable game.

At some point Coach Woodson must speak to Anthony and Smith and forcibly tell them that Raymond will setup their shots and no one else. If he doesn't then Woodson's history of getting bounced in the second round of the playoffs will repeat itself.

The reckless offense that got the Knicks to the playoffs simply won't due against the very physical play of the Pacers, particularly when the referees are not going to bail the Knicks out while the Pacers push them around.

Amare' Stoudemire is the type of player that the pacers have no answer for, let's see if he returns in the next game or two and how much time he gets.