People let me tell you 'bout my best friend

Listen I have grown to absolutely love JR Smith. He is the Ralph Kramden of professional basketball players. You can always count on him doing something stupid to louse a perfectly good situation and it's hilarious. 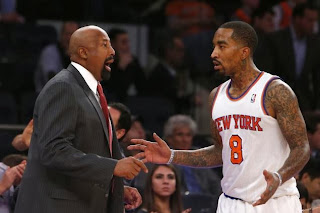 With the game tied at the final 23.3 second mark Tyson Chandler grabs a possession of the ball and passes to JR Smith giving the Knicks an opportunity, for all intents and purposes, to wind down the clock and take the last shot.

JR didn't know the score and with 19.9 seconds left he cranks up a three point shot.

It would have been nice of him to have known that the score was tied but had he I wouldn't have laughed as hard as I did tonight. I mean isn't the purpose of me watching the Knicks is to be entertained?

You can probably guess he missed the shot and Houston went on to win the game with some free throws.

As I type this I am now enjoying the rancor from sports radio hosts and their call ins questioning JR Smith's IQ. I mean you just can't beat this.

“We were right where we wanted to be, but at the end of the game, we had some mental breakdowns.” Tyson Chandler