JR Smith the voice of reason?!? 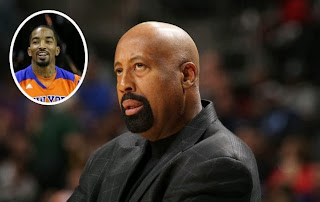 I do know that the team had zero energy and could have used Smith if he was mentally prepared to attack the rim and shoot enough to unburden Anthony.

Carmelo expended most of his energy the previous evening to defeat the Suns in overtime and didn't have his shot in last nights game.

Would JR have been enough to beat the Bobcats especially with no interior defense to contest Jefferson? Probably not but the Woodson/Dolan dog house is now getting in the way of opportunities to be competitive.

JR Smith was the voice of reason after the game when he stated that if he isn't going to help then he shouldn't be there. If I were a Knick fan I would hope that management took that statement seriously and moved Smith before the deadline.

Smith's 18 points can and will be made up by the Shumpert/Hardaway combination and they are both better defenders than JR. Even a late round draft pick for Smith would be worth doing a little house cleaning.

Who would have thought that JR smith would have been the voice of reason in that organization?!?