It would be very easy to blame that half blind bald headed fucker joke of a referee Joey Crawford and his awful crew for tonight's loss to the Pacers but that would not be the complete truth. 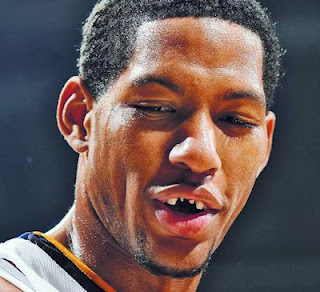 The Knicks had a 17 point lead on the Pacers midway through the third quarter only to squander it by getting out hustled and playing completely one dimensional basketball. The refs should not even have been given a chance to be a factor, but a factor they were when they got their opportunity.

Knick ball movement was almost non existent in the second half so when Carmelo went into his drought and Novack was on the bench the Knicks had no answer for the Pacers run.

It would have been nice to sweep the season series from the Pacers but I guess they get paid to play too. The Knicks know they can come to Indiana during the playoffs if they need to and win from last month's home and home whoopin they put on them.

Hopefully Mike Woodson will learn that maybe D'Antoni's ball movement offense isn't so bad when Carmelo is in a dry spell. We'll see.