Mike Woodson just doesn't get it 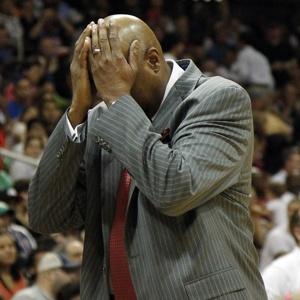 The Knicks were actually playing the Bulls very closely and had an eight point lead when Mike Woodson did the inexcusable. He put Toney Douglas into the game for Baron Davis which killed the teams flow and gave the Bulls second unit the confidence to not only come back but to take the lead.

Even though the Bulls lead was only ten points because the teams were so evenly matched tonight a ten point lead was almost like twenty and insurmountable with the continued poor three point shooting.

I don't know if Douglas has no shot because of his shoulder injuries but it does seem like he is afraid of penetrating and drawing contact which means that he is completely useless. Shumpert should move over to the point when Davis goes out and Fields needs to slide down to the two.

With Lin going out and Douglas relegated to the second unit you would think that he'd take the bull by the horns and run the D'Antoni style offense with high energy, lots of cutting to the basket and ball rotation but no. Douglas is more concerned with finding his jump shot than seizing the opportunity presented to him.

I know this for damn sure, Mike Woodson had better learn right now that Douglas doesn't deserve a minute at point other than garbage time. we can't afford to lose anymore games because of Woodson's attempt to turn Douglas into the point guard he will never be.