Instead of rotating the ball quickly and forcing the Heat to make mistakes like leaving a shooter open or freeing Amare and Tyson Chandler to roll to the basket the Knicks decided to look for isolations to Carmelo Anthony which the Heat defended to perfection. This lead to lots of turnovers, fouls when attempting to recover and easy baskets for the Heat.

D'Antoni's offense ironically is the only chance they have against the Heat but that would mean that Toney Douglas would have to shake off his year long funk and grow some balls and run it. I doubt that will happen.

Also lost today was Iman Shumpert who looks to have blown out his knee while pushing the ball up the floor after a Heat turnover in the 3rd quarter. 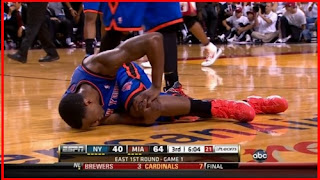 The most glaring problem for the Knicks is the lack of a penetrating and quick point guard who could have broken the Miami zone and help defense on Carmelo. Unfortunately the Knicks don't have that kind of player on the bench and therefore will be bounced out of the first round in a sweep in my humble opinion.

We traded half the team for this shit?

Glen Grunwald had made some nice moves as acting GM after taking over for Donnie Walsh but he has done an awful job by not cutting Toney Douglas and signing a young point guard after Jeremy Lin got hurt.

On a side note, the league really has to talk to the referees about buying into all the faking and flopping by Lebron James. It was disgusting to watch.