The Miami Heat passed the ball, cut to the basket and looked for each other which resulted in easy layups and wide open three point shots. I had to check their bench a couple of times to see if Spoelstra had hired D'Antoni unbeknownst to us. 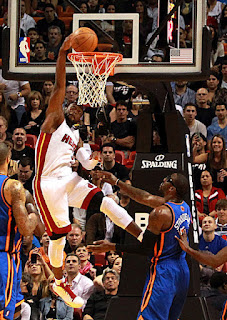 The Knicks on the other hand stood around watching Carmelo Anthony jack up shots all night, did not cut to the hoop consistently and did not rotate the ball which resulted in forced shots, contested shots. Woody had better start coaching like his job here depends on it, because it does.

The Knicks lost but Carmelo got his 30 and that's all that matters to this organization and everyone else who justifies his presence.