The first sign of sanity and good leadership in the Knicks front office in almost a decade was reported today when Steve Mills went on record stating that he has no intention of re-signing Derrick Rose. 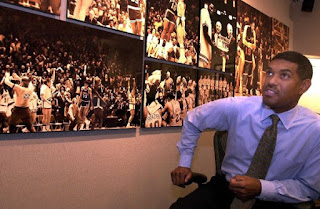 Mills wants to develop the Knicks by staying young and maintaining cap space.

I was not happy to see the Knicks waiving of Maurice Ndour. I think that was a knee jerk reaction to get rid of Phil's most desired players and a big mistake.

It seems that years of watching the good of Donnie Walsh and the bad of Phil Jackson has rubbed off on Steve Mills and the organization might just have a sound mind running the franchise.

Apparently Steve has also convinced Carmelo Anthony to drop his no trade clause for a deal to either Cleveland or Houston if one can be worked out.

The Knicks have shown great restraint to not fly off and buyout Anthony which would cause a big hit on the teams cap room.

If Anthony is willing to waive or lower his trade kicker you could very well see Kevin Love a Knickerbocker before the end of the week and Carmelo and Lebron with championship dreams in their eyes together in Cleveland.

The Knicks might not be a fucking joke any more under Mills, whodathunk it?