It is being reported this afternoon that Kyrie Irving is demanding a trade out of Cleveland. 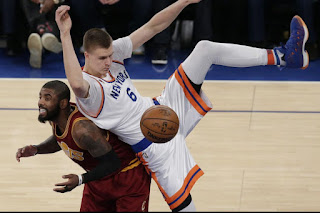 This comes a day after I found out that the Cavaliers are in talks with Derrick Rose.

If the Knicks new brain trust is worth half a damn they are on the phone with the Cleveland front office right now to work a deal for Irving and Iman Shumpert in exchange for Carmelo Anthony.

It is also reported that Irving would be willing to come to New York. For some reason he actually wants to be a Knick.

The money for such a trade would almost match perfectly and everyone gets their wish.

If the Knicks can't slam dunk this alley-oop they ain't shit.