I found out this morning that James Dolan has yet to meet the new Knicks GM Scott Perry. 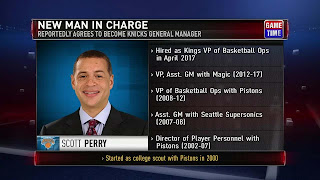 Well to be perfectly honest with you I had forgotten that the Knicks had a new GM.

Now, I know that the owner of the team should have more of a handle on the personnel of his organization than I do but I think that it speaks volumes about what Dolan thinks of the guy and the fans.

It should be noted that on the day that Perry was hired, July 14th, James Dolan did send out a press release stating that he was Steve Mills' hire, Mills is now the president of the team, and Dolan had no influence upon Perry's hiring.

Well, I guess it was nice that he acknowledged Perry's existence but you'd have thought that he would have at least taken the man, along with Mills, out to lunch or something.

Scott Perry is coming from the Sacramento Kings were he had the title of vice president of basketball operations. Yeah, doesn't mean much to me either.

However after hearing about Perry's new hire for assistant GM, Gerald Madkins we all were given Perry's secret to winning in the NBA. Ready for it? It's soul food. That's right, soul food.

Apparently when Perry was working for the Pistons in the early 2000's for Joe Dumars, Perry would cook up mean pans of: mac and cheese, ribs, fried catfish and cole slaw and presto, the Pistons went on to win a championship in 2004. Perry feels that all that greasy, high carb and sugar laden food creates the sense of family and camaraderie that are the keys to being a winning franchise.

I think it contributes to diabetes but hey I am not a great basketball mind so what do I know. I am not making this up.

This franchise, boy I tell ya. Nothing but yucks.
at 1:27 PM