According to RealGM dot com the Knicks are concerned that Carmelo Anthony's recent bout of back spasms could be a season long injury related to an injured disk. 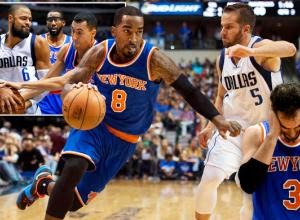 Last night the Knicks played decently against the Mavs until Dirk Nowitski's 30 points and Tyson Chandler's 25 rebounds were too much to handle.

Especially in overtime when there was no Carmelo around to score.

Thanks Jim Dolan for the Anthony trade, its the gift that keeps on giving.