I listened to the Phil Jackson press conference and learned two things. No, really I did.

First, James Dolan had the guts to admit that he was out of his element running the Knicks and didn't know what the hell he was doing. Now if you are a regular reader of this blog this is nothing new to me but to state it publicly is the first step to recovery for Dolan and the Knicks as an organization. 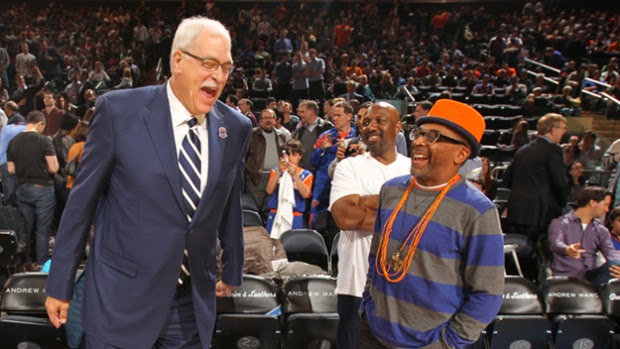 The second thing I learned is Phil Jackson has no basketball faerie dust. He has nothing in his satchel that he can toss a handful of and magically make this a better team next season.

Jackson clearly stated for anyone bothering to listen that the team you see today is for all intents and purposes the team that you will see next year.

Jackson took a very long pause when asked about the security of Woodson's job which means that he was searching for a nice way to say that Woody has about 16 games left as head coach of the New York Knicks.

Jackson wants the triangle offensive philosophy implemented because he believes that it will raise Carmelo Anthony's game. Woodson knows nothing about the triangle so nice knowing you coach.

What happened during the press conference that was nothing new was the jackbooted thug mentality of the Knicks media policy. New York Daily News writers were waived off, again, when they wanted to ask questions. I am no fan of Isola or Lupica but they are a part of the press and deserve to have their questions addressed. There is still some cowardice at Madison Square Garden.

Knicks fans desperate for any ray of hope will be jumping for joy that Phil is running the Knicks which in their minds means that a championship is just a few weeks away. Slow down partner.

The Knicks still won't have any cap room after this season and if they did there aren't any great free agents anyway. The Knicks don't have a first round draft pick until this time next year and Carmelo Anthony has stated publicly that Phil Jackson being President of the team has no bearing on his desire to test the free agent market.

Knicks fans you will have a new coach next season and I am sure you will begin the season with optimism but realistically your team still has a lot of losing to do before getting remotely better.