A bunch of slow old men

With Amare Stoudemire unable to shake of his rust, Prigioni constantly duped into going for steals and JR Smith being beaten off the dribble for easy layups the Knicks looked like a bunch of slow old men tonight against the Portland Trailblazers. 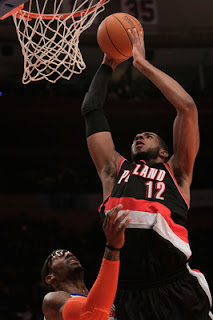 Again the Knicks played poorly on defense early in the game and fell into an insurmountable hole.

Carmelo Anthony got his 30, which he always does, but tonight the Knicks back court had no answer for the quickness and shooting ability of the Blazers.

By double teaming Anthony and forcing the Knicks to get scoring elsewhere the Blazers went on to have the victory despite a late mini run by the Knicks.

If the Knicks guards can't solve the give and go and cannot cease to be baited into failed steal attempts this team will quickly fall to .500. Raymond Felton was truly missed this evening.