Beating them is quite simple 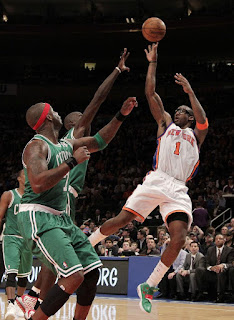 The Knicks are a very good team but the book on beating them is quite simple. Get underneath their skin and they will lose their composure, play offense out of revenge and they will argue with the referees leading to technical fouls.

The Celtics knew full well what to do to beat the Knicks tonight and now so does the rest of the league.

Anthony spent the bulk of the second half locked in yelling and shoving matches with Kevin Garnett and his shooting was affected negatively.

You would think that Anthony would have worked to get close shots at the rim since his jumper wasn't falling and Novack was a ghost but no. Anthony kept missing jumpers leading to the Knicks latest loss.

Let's see if Carmelo Anthony and his gang will take the next big step to become an elite team and that step is maturity.