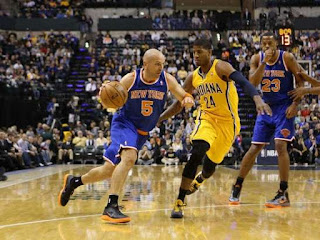 The word around town today is that the Knicks lost last night's game because Carmelo was serving his one game suspension. That is true, I can't argue against it but let's be honest.

This team was having issues winning the past month even with Carmelo and for one very important reason and that is no Raymond Felton.

When the Knicks have faced teams with very quick guards without the help of Raymond, Jason Kidd and Prigioni simply look like statues and if their shots weren't falling the Knicks were certain to lose. The games that the Knicks were able to win Carmelo had to rack up 35 or 45 points.

The Knicks had some success without Felton because Anthony is a scoring juggernaut at times but when he is off his game only Raymond can orchestrate the point guard position well enough to get other players in position to score.

Amare Stoudemire is very rusty and looking like a shell of his former self but only because the current Knicks point guards don't handle the ball ferociously enough to keep defenses off balance which would allow for more space for Amar'e to operate.

The return of Iman Shumpert will certainly make the Knicks a better team on defense but this offense is not going to return to being the well oiled machine we witnessed early in the season until Raymond Felton returns to carry the load at the point.