It certainly can be argued that the Knicks lost to the 76ers yesterday because they were looking past them to today's game against the Atlanta Hawks.

You could also say that there is a lot of rust on Felton who returned last night and Amar'e and Shumpert. 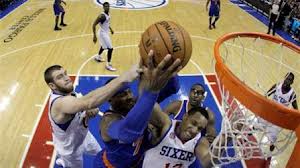 Those are good arguments but the reason for yesterday's loss in my opinion had less to do with rust and more to do with coach Woodson's hard head.

Like Toney Douglas last year once Woodson gets an idea in his head he is reluctant to change it until his team is on the brink of disaster.

This force fitting of Amar'e and Carmelo on the floor at the same time does not work and will not work but coach just can't get that through his thick head.

After Melo and JR Smith proved that they couldn't hit an elephant in the ass with a two by four Woodson should have immeditely allowed Felton and Amar'e to work on the court minus Smith and Anthony.

Amar'e was the only guy who showed up offensively yesterday and could have gotten 40 points on the slow footed big men of Philly but because he was on the floor with Melo and Smith his touches were limited and yet he still managed to get 20 points.

I am not saying that Amar'e should start in place of Anthony, not at all, but I am saying that once he agreed publicly to coming off the bench coach Woodson should have put an end to this ridiculous experiment.

Amar'e's role should be as the featured scorer on the second unit working with Raymond primarily at the point.

If not the Philly game will become more of the norm and less of the exception.