Those guys get paid millions too

Last night it took the Knicks a half to figure out how to play without Carmelo Anthony and Raymond Felton. The team got down by as much as 27 points and it looked pretty dismal. 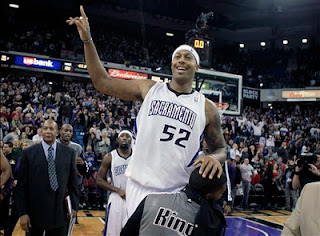 However, after half time coach Woodson came up with the right adjustments and the team awakened from its funk to storm back to take a 105 to 103 lead with seconds remaining.

In the final moments of the game the Kings' Isiah Thomas, isn't that ironic, drove the lane and kicked the ball out to James Johnson who hit the game winning three point shot.

Those guys get paid millions to play too so on a night with the Knicks playing minus their two leading scorers this loss wasn't major. In fact I think it was very good for the team.

This team lifted itself up and showed true grit to fight back from such a huge deficit on the road but most importantly they now have a strategy to play minus Carmelo and I expect them to get on another winning streak until he returns.