I never told you guys this but I have a very close high up source on 33rd street. I will NEVER reveal his or her name only to say that they've eaten barbeque at Dolan's Long Island mansion before. 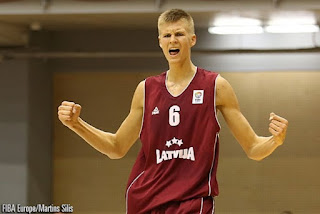 I have it on very good notice that the Knicks are going to select Kristaps Porzingis with the first pick in the draft.

Phil Jackson envisions a future for the Knicks that has Anthony playing a very limited role in a couple of years due to his age and injuries and believes that Porzingis will be the face of the team for the next decade.

There is also the possibility of a coaching change if Jackson can convince Dolan to eat Fisher's contract.

Everything told to me could all be bullshit to throw me off and maybe the 76'ers who seem only motivated by not allowing the Knicks to have what they want will draft KP instead of building a well rounded team. We shall see.