It hurts your hearts

I thought that I'd be in bed by now but I have stayed up listening to radio hosts and Knicks fans crying and dying over Porzingis being selected with the fourth pick. It's fucking hilarious. 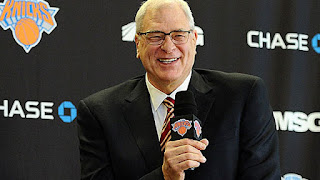 No one knows what any of the guys selected tonight are going to turn into.

Some players we don't expected much from will become stars and others we expect to be future stars will be bums. That's just how it is.

If you are really a fan of Phil Jackson and the Knicks the only thing you should really be concerned with is hoping that Phil has the pieces in place to develop Porzingis to the peak of his ability. But I think I have figured out what is really burning peoples asses.

These people are stuck in the paradigm that the Knicks are supposed to win with Carmelo Anthony. The fans are angry because they don't believe that Porzingis is ready physically to help Anthony make a run for the title and he's not. So, what should that tell you Knicks fans?

It should tell you that Phil doesn't think that he can win anything with Carmelo Anthony so he is building a franchise for the years when Carmelo is no longer the star here. Phil is not going to push his chips in on molding something that Anthony might be able to succeed with. Subconsciously you guys know this and it hurts your hearts because Jackson's plans don't seem to include Anthony.

Phil didn't take Kaminsky or any of the other "NBA Ready Guys" because he sees a bigger upside for Porzingis when Anthony is no longer the face of the franchise. Suck it.

The best thing for the Knicks is to trade Anthony so that Phil can be completely free to shape the team to his 60 million dollar vision.