Knicks will never do it

There are rumors that the Detroit Pistons would like to trade Brandon Jennings for Tim Hardaway Jr. 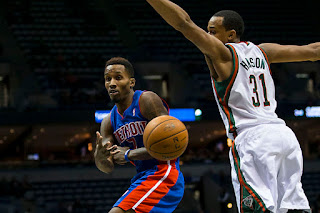 If Jennings can be proved to be 100 percent healthy then it is a no brainer and should be done in a New York minute. Which means that the Knicks will never do it because they aren't that bright an organization.

A friend asked if the Knicks should trade Carmelo back to Denver for their 7th and 57th pick. If Denver threw in Kenneth Faried I'd do it but the Knicks would never. James Dolan will go to the grave before admitting that the trade to make Anthony a Knick was a mistake and trading him now would be just that.

Carmelo will suck that last nickel out of his current contract in a Knick uniform even if it means the team not becoming as good as it could be and that is why I never will root for this team again in life.