The Knicks are so fucking pathetic that they can't even get anything from tanking the entire season.

Tonight the Knicks found out that the worse record in the NBA is worth for them the fourth overall pick in the NBA draft. 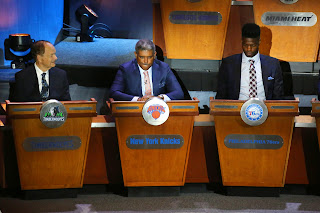 Even Steve Mills, whom Phil Jackson wanted out but was kept by James Dolan who promised that he wouldn't meddle, looked bewildered. The only thing that would have made me happier is if Dolan had Isiah sitting there in his place.

I love watching this franchise fail.

Well, we now know that Okafor and Towns will never be Knicks. The question is who will Dolan tell Phil he can draft.

If there was half a brain left at MSG the Knicks would not hesitate to select the Ohio State freshman phenom D'Angelo Russell or Emmanuel Mudiay if Russell is gone. Russell is the second coming of Walt Frazier for real.

But we all know that the smart thing is never in the plans of the Knicks and if those two future star point guards are available Phil will probably be instructed by Jamesiah that he has to take some 7 footer from Laos that no one has ever heard of.

The Knicks lost again tonight and the ball was never even tipped.