What a fat fraud

It is being reported this afternoon that Carmelo Anthony threatened to fuck up Tim Hardaway Jr. up after the Brooklyn Nets game because he yelled at him on the court to move his lazy ass and get a rebound. 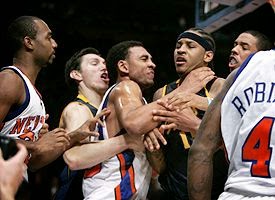 How dare Hardway point out that he doesn't hustle on the glass.

But you want to know what the funny thing is? I remember Anthony yelling and Jared Jeffries on the court after Jefferies made a pass to the closest man to the basket with seconds remaining instead of him.

The shot was missed but it was the correct play, like going hustling for a rebound, but Anthony had no problem disrespecting Jared on the court that night but don't you dare do it to him. What a fat fraud.

All he can do is score and when he doesn't have that going at an efficient rate he is a liability on the floor. He is a good scorer not a great player. Stop it already.

Phil Jackson should have let him go to the Bulls and began the rebuilding this season.