Look for JR Smith, not J.R. because the J and the R don't stand for anything, and possibly Iman Shumpert to be traded for size very soon. 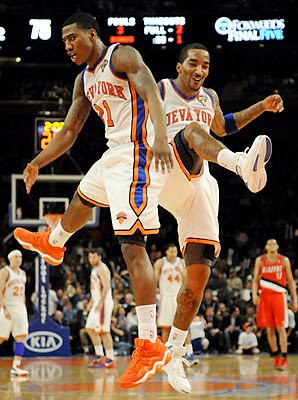 Phil Jackson watched Tim Hardaway, Jr. play himself into an invite to the national team as he shot the lights out of the summer league and he now is confident that he can get JR's offensive production minus the headaches and drug suspensions.

The team defense that he preaches doesn't really need a shutdown defender who is hit or miss offensively so I can't see Iman staying with so much demand for him in the league.

There are some decent power forwards such as Antwan Jameson and Willie Reed who played in the D league that I can see the Knicks signing and trading Smith and Shumpert for a gaggle of future draft picks if teams don't want to part with their big men.

However it plays out both guys probably won't be Knicks next season.

I only hope that Shumpert lands on a good team like the Spurs or the Thunder. Smith can go kick rocks as far as I am concerned.
at 1:44 PM