Your owner is a douche bag


I came to the conclusion after the Carmelo Anthony trade that for as long as James Dolan owns this team I can't root for them so I had to go. 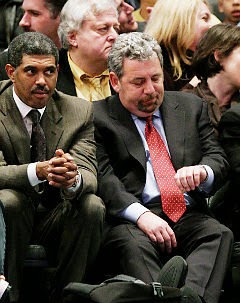 Two weeks ago the remaining Knicks fans and media got what they thought was great news at the time. Dolan had hired Phil Jackson to run the team.

Dolan even had a press conference to announce that he was happy to be giving up the running of the team and all operations because he wasn't good at it and it wasn't what he wanted to do.

It is now being reported by Mike Isola of the New York Daily News that James Dolan lied to everyone in New York and is back to his meddling ways.

I had heard that after Jackson fired the entire coaching staff Dolan was said that he'd "encourage" the next coach to hire Herb Williams back as an assistant.

Isola is also reporting that Phil doesn't like the medical staff controlling the playing minutes of healthy players and wanted to either get rid of the policy or the medical staff. Well, that didn't sit too well with Dolan who told Phil that he should just worry about managing the players.

Does this idiot Dolan know that this continued behavior and lying is going to make it difficult to recruit a great head coach and top notch players who want no part of his bull shit?

Hey James, we know that you are the owner but are you such a douche that you can't bare to give up all the vestiges of your losing organization because you don't want to be seen as impotent by the lackeys you gave Knicks jobs to?

Give them jobs under Cablevision if you just want to hand out checks to your buddies.

Had the Nets not moved to Brooklyn this would have made for an extremely difficult couple of years for me because I would have felt forced to stay a fan of the Knicks and at the same time completely taken advantage of by its owner.

You remaining Knicks with your battered spouse syndrome, I hope that you are happy but I can never cheer for that team again and it's all because your owner is a douche bag.