As a coach, Mike Woodson is about as dumb as they come.

Carmelo Anthony had been hurting since the second quarter and didn't make another shot until the fourth. 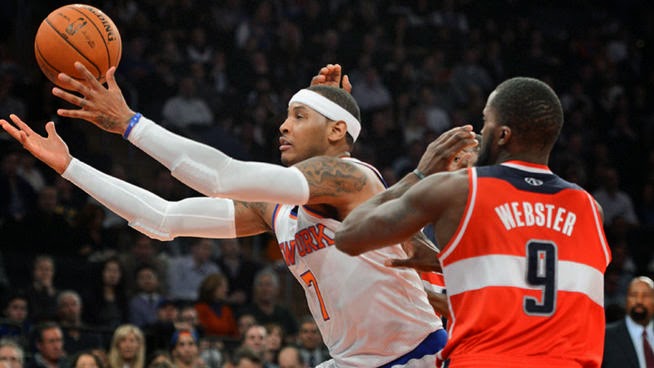 Despite Anthony's struggles JR Smith's shooting and a lineup of Smith, Hardaway, Stoudemire, Prigioni and Shumpert had the Wizard's looking slow and uninspired.

Early in the fourth quarter Shump's defense was outstanding and with Amare playing his ass off both ends of the floor the Knicks had the lead and it looked as if the Knicks had the right combination to beat Washington. Especially in a game very important because the Hawks were winning at the time.

What does fat head Woodson do?

He sits Amare' for Anthony which throws off both offense and defense for the Knicks so badly that they couldn't recover and the Knicks go on to lose the game.

Whatever lies Woodson told himself about having a chance to coach this team next season under Phil Jackson are gone after tonight.

Phil was sitting near court side watching this pathetic coaching and I am certain that if he was the least bit on the fence about Woodson tonight sealed his fate.

Jackson is not going to let a coach this stupid run his team.