This post will be brief but I had to write something after listening to radio talk show hosts publicly scratching their heads over the recent signing of Kevin Durant by Jay-Z. 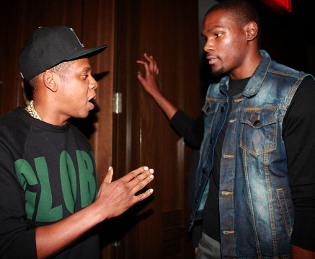 One radio host had a current agent on who made follie of the signing and they both chuckled how foolish this signing was because in their opinion Jay-Z doesn't know anything.

They were also taken aback at the "disloyalty" Durant showed to his current agent.

Well, let me explain to these morons very plainly why Jay-Z is so appealing to today's athlete.

Anyone with a radio or television has heard or seen stories of big name athletes in all the major sports winding up sleeping under bridges, dying of cancer destitute, unable to support themselves and their families when their playing days were done. Guess what, all those guys had "experienced" agents too.

The Geno Smith's, Kevin Durant's and Robinson Cano's of the world didn't sign with Jay-Z because of the the next contract but so that Jay-Z can advise them on wealth management.

These young cats do not want to be the subject of the next ESPN 30 For 30 about broke former athletes.

Jay-Z has not simply made a lot of money rapping he is a very astute
businessman who has turned his rap riches into what will be generational wealth for his descendants. That is nothing to joke about or giggle over.

For anyone to see Jay-Z attracting young and wealthy athletes as simply a matter of these young people wanting someone to hangout with is at least ignorant and at worse borderline racist. Fuck loyalty.
at 5:58 PM