I do want to address all the fuckery

It is even easier to do when the game includes poor officiating and the Knicks lost their composure which almost always guarantees losing. 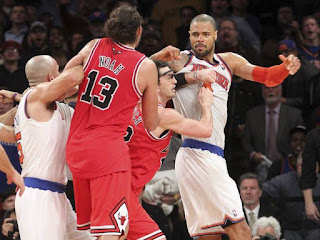 This is a formula that they are certain to see for the rest of the year and throughout the playoffs, if they make the playoffs.

I do want to address all the fuckery that is going on in the media regarding Amare Stoudemire.

Apparently a bunch of little bitches with columns have found out from their MSG leaks that the Knicks were unable to move Amare Stoudemire in the off season, hell according to their "reports" they couldn't even give him away.

These little punks can't see that they are clearly being used by Jim Dolan in order to shame Amare into taking a lesser role on this team with very little squabble from the all star.

Dolan is obviously pissed that Amare is owed so much money and the Knicks are now having success without him so like a little bitch, which is why I am guessing this strategy is coming from Isiah Thomas, the powers that be at MSG have taken to a backdoor campaign of dirty pool against Mr. Stoudemire.

Well, its not going to work because Amare is not a stupid man despite his lack of a college degree. He knew when they placed Marshmelo Anthony in his position his starting job was lost.

Amare knew before the season began that he'd probably be coming off the bench and prepared himself mentally to not be a distraction. All he has to do his stay healthy enough to show up each season and play out his contract and he and his new wife are set for the rest of their lives.

When Amare and Felton share the court JR Smith's shots and minutes will be reduced and the dynamic duo will have good success scoring the ball. Smith won't like it and will most likely leave after this season but he was going to do that anyway because of how little he is making so how he feels about Amare taking his sixth man role doesn't matter much.

So yes, Amare will be a Knick for the remainder of his contract and he will not be a problem with his new role as the sixth man but this team will still never win a championship because it has hitched its wagon to Anthony but most importantly, because Jim Dolan is the owner.

I can go back to sleep now.