The Knicks lost twice in one day 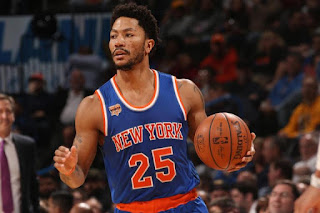 One day after Knicks fans were giggling about the idea of playing the Brooklyn Nets in the first round of the playoffs if the season ended that day the Knicks lost to the hapless Miami Heat.

Jimmy Butler and Bam Adebayo put it on the Knicks at will and from every spot on the floor.

Reggie Bullock and Julius Randle showed up to play in the Garden but I do wonder if the rest of the team was concerned about who would be going in a trade which made all the young guys play tight.

Not a single Knicks guard managed double digits in points so I guess it was no surprise to find out later that the Knicks pulled of a trade to acquire Derrick Rose from Detroit in exchange for Dennis Smith Jr. and a 2021 Second round draft pick, via Charlotte.

Yes, that Derrick Rose that did a no call no show and went home to Chicago the last time he was here much like Kyrie Irving's disappearance this season.

I do feel sorry for Immanuel Quickly though. He is another young player with potential that the Knicks seem to not give a damn about. IQ will certainly be getting fewer minutes now.

The rest of the guards will be on pins and needles until the trade deadline or fear they will simply give up on the season all together.

Elfrid Payton should be relieved though since with fewer minutes there won't be much criticism on social media for him to be sensitive about. But then again, that is not my problem.

So yes, the Knicks lost twice in one day, on the trade and the game. Only this franchise could ever pull something like this off.