You guys have a lot of shooting practice to do 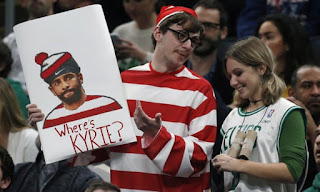 I tried to leave y'all alone. I really did. I mean a three game losing streak should have been enough to keep you fuckers quiet going into tonight's game against the Nets but no.

You guys have the nerve to talk shit because Kyrie Irving is AWOL from the Nets. As if this equals every malfunction the Knicks as an organization has brought upon themselves in the past 49 years. These teams are not equal in anyway and a good spanking tonight should prove that.

It is to bad however that Kyrie wanted to party and hide behind his fake social justice warrior act to miss out on the game.

Did I want Mr. Irving a Net? No I did not. However, signing Kyrie was the only way to get KD in Brooklyn and it worked. Now that KD is locked down for the next three seasons Uncle Drew and his act should go to Houston straight up for James Harden.

Brooklyn has enough flat Earth empaths, we don't need another one skipping out on work no call no show while being paid millions of dollars.

Sean Marks, if you are reading this, get him out of here right now.

Kevin Durant, Caris LeVert, Jarrett Allen and Joe Harris are more than enough to handle to the gang that can't shoot straight from MSG.

Austin Rivers, wait until you guys make the payoffs before you start entertaining talk of a rivalry with the Nets. You guys have a lot of shooting practice to do in the meantime.